Star Trek Online: Rise of Discovery is Now Available on PlayStation 4 and Xbox One

Perfect World Entertainment and Cryptic Studios have announced that Rise of Discovery is now available in Star Trek Online on PlayStation 4 and Xbox One, along with new episodes, more characters, and a new Reputation. 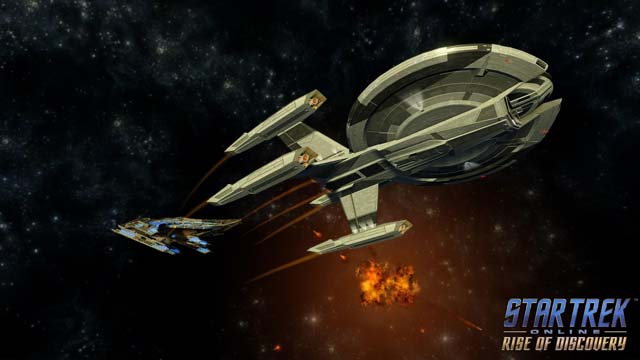 Rise of Discovery lets players board the U.S.S. Buran, a ship commanded by Starfleet Captain Gabrial Lorca and Commander Ellen Landry, who are both voiced by the stars of the show themselves, Jason Isaacs and Rekha Sharma. Below, mmoam has outlined detailed info of all the special content console players will be able to get in. And if you need any energy credit, Mmaom.com is the best place for Cheap Star Trek Online Energy Credits

You can check out the launch trailer here:

These events take place across brand new missions featured in Rise of Discovery. A full list of new content includes:

Two New Featured Episodes – All of the game’s captains can participate in two brand new playable episodes which take place in the Star Trek: Discovery universe.

“The Plausibility of the Possible” –  Players will rescue the U.S.S. Buran, led by Captain Gabriel Lorca and Commander Ellen Landry, after the Starfleet ship is attacked by Klingons.
“Impossibility of Reason” – Star Trek Online captains will team up with Landry on an urgent mission to rescue Lorca from a desolate ice moon before he is apprehended by a Klingon search party.
Star Trek: Discovery Characters – Rise of Discovery features original voice acting from Star Trek: Discovery’s very own Jason Isaacs (Harry Potter film series, The Patriot) as Captain Lorca and Rekha Sharma (Battlestar Galactica, Alien vs Predators: Requiem) as Commander Landry.

New Reputation – Console captains can explore a new Tier 6 Reputation, “Discovery Legends,” which allows players to earn exciting new Discovery themed rewards. All of the Discovery Task Force Operations will now feature Advanced and Elite versions that have been converted to support this new reputation and pay out Discovery Legend Marks.

In addition, level restrictions have been removed for Tier 6 starships across all of Star Trek Online’s platforms, including PC, Xbox One and PlayStation 4. This means that all of the game’s vessels now scale to individual character level, giving players the chance to fly premiums ships that were previously only available to those who had reached a certain level in the game.

From July 2nd through October 13, PlayStation Plus and Xbox Gold members will be able to unlock free rewards for Star Trek Online! The reward packs on each console include a color-variant Tardigrade Combat Pet, a color-variant Assault Drone Vanity Pet and three Master Keys.

To celebrate the launch of Rise of Discovery, Cryptic Studios has started a sale on Keys and the Lobi Store. The Lobi Crystal Consortium is offering a 20% discount on all its wares, such as the Kelvin Timeline Intel Dreadnought Cruiser, Boolean Heavy Assault Cannon, and Vaadwaur Astika Heavy Battlecruiser. Meanwhile, Enchanted Keys are discounted by 15% and there is a new limited time bundle. The Key Ring Bundle offers 20 Master Keys for 2250 Zen, and any player who purchases this will get a single Ultimate Tech Upgrade that instantly maximises an item's Mark and Quality at no Dilithium cost. Both sales and the bundle run until 10AM PT on July 1st.